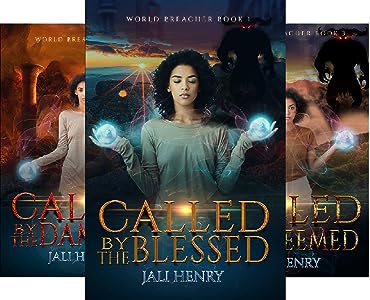 Get FREE books & new releases for helping this author grow!

See the series on Amazon!

Naledi, is a teenage Aids orphan, struggling to raise her younger sisters, in rural Africa. Naledi develops the magical ability to breach portals through time and space, including Heaven and Hell. She gets enlisted by a couple of archangels to stop a demon resurrection. If she fails, her sisters will die, demons will take over the world and she’ll get trapped in hell for eternity.

Giada, an Italian teenager, is a newly-damned soul, in Hell. Giada struggles to come to terms with the sins that she committed to land in Hell. Is she really destined to spend the rest of her existence enslaved to demons? Or is there a way out?...

The destinies of these two protagonists entwine. Naledi deepens into her magical powers while defeating villains and saving the day. Giada develops emotionally, with the help of Naledi and other friends that she makes in Hell.

Escape to a world like none you've experienced before. Submerge yourself in rich world-building and a story that asks deeper questions about the meaning of life. With laugh-out-loud moments as well as emotionally raw moments, sweet romance and characters to fall in love with.

For fans of Dante's Inferno, The Hunger Games, Phillip Pullman (His Dark Materials) and Black Panther.

A street team helps an author hype his or her book. They come in especially handy during giveaways and new book launches.

In short, the street team helps spread the word about the author and his/her books!

What does the Street Team get for their efforts?

Street team members get first access to new releases, entries in special "team only" giveaways and other perks. They also get access to a private Facebook page dedicated to the Street Team. In general, the author tries to make being a team member FUN.
Share!