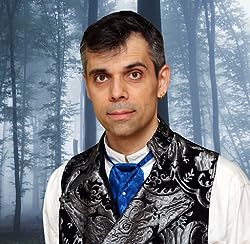 In 2014, Adam Dreece stopped hoping to be an author one day. Since then, he's written his best-selling, 5 part steampunk meets fairy tale series, The Yellow Hoods, introduced the world to his science fiction side with The Man of Cloud 9, and brought out his all action, post-apocalyptic fantasy side in The Wizard Killer.

These days, the multi-award finalist author is working on kicking off his fantasy space-opera series, Tilruna, with an initial installment that will pull from Shakespeare's Hamlet, called Tilruna: Fall of House Andes, due this fall.

He lives in Calgary, Alberta, Canada with his wife and children. He is an active public speaker, panelist, and author in Canada and the Pacific Northwest.

Get a Three Book Sampler of Yellow Hoods for FREE with newsletter subscription! (also available on WattPad) 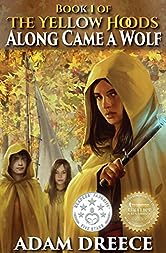 Tee, Elly, and Richy peaceful little world is shattered when they become entangled in a plot to steal the world's first steam engine plans from master inventor, Nikolas Klaus. Will Klaus' ties to the secret society known as the Tub (lead by a butcher, baker, and candlestick maker) be their undoing? Or will they live on to become legends?

The series grows in intensity as it goes and uses humor along the way. It has strong female characters, no graphic violence, no sexual content, and is loved by kids aged 9-15 and adults (written for both audiences). Loved by fans of Percy Jackson, Harry Potter, Ranger's Apprentice, and more.

Awards and Accolades:
Finalist for IAN's Book of the Year 2015 in Young Adult, Honorable Mention by Reader's Favorite for their 2016 award for grades 4-6, Calgary Herald best-sellers in '14 and '15

"...intriguing contraptions, appealing characters, snide villains, humor, and an exciting story." --- Kirkus Reviews
"Dreece has crafted a tale with elements to delight the child in all of us, and intrigue the most creative adult mind." --- Author J.K.Norry