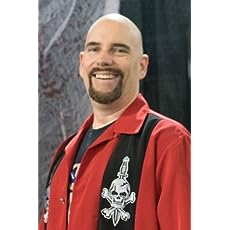 Mark Leslie would be the first person to admit he's still afraid of the monster under his bed.

Proudly adopting the term "Book Nerd" for himself, Mark is a writer, editor and bookseller and is most comfortable with a pen in hand, fingers on keyboard or with his nose stuck in a book.

His first book, ONE HAND SCREAMING (2004) collected mostly previously published short stories and poetry along with a few original tales. His other fiction includes I, DEATH (2014), EVASION (2014) and A CANADIAN WEREWOLF IN NEW YORK (2016). Mark's dark fiction is often compared to "Twilight Zone" or "Black Mirror" in terms of style, exploring "what if" themes with contemporary settings that include speculative elements, gently skipping around the genres of sci-fi, horror and urban fantasy.

He is also the editor of the science fiction anthologies NORTH OF INFINITY II (2006), TESSERACTS SIXTEEN: PARNASSUS UNBOUND (2012) the horror anthology CAMPUS CHILLS (2009) as well as FICTION RIVER: EDITOR'S CHOICE (2017) and FICTION RIVER: FEEL THE FEAR (2017).

Mark's first non-fiction book, HAUNTED HAMILTON: The Ghosts of Dundurn Castle & Other Steeltown Shivers (2012) is an appreciation of his hometown told in a combination of historic journeys combined with ghostly legends. His second non-fiction paranormal title SPOOKY SUDBURY: True Tales of the Eerie & Unexplained (2013) is co-authored with Jenny Jelen, about the city they both grew up in. TOMES OF TERROR: Haunted Bookstores & Libraries (2014) explores the types of places Mark most loves to haunt. CREEPY CAPITAL: Ghost Stories of Ottawa & The National Capital Region (2016) explores the eerie and ghostly tales from Canada's capital city. HAUNTED HOSPITALS: Eerie Tales About Hospitals, Sanatoriums, and Other Institutions (2017) is co-authored with Rhonda Parrish.

Mark continues to publish short fiction in small press horror magazines and anthologies and most recently had stories appear in TESSERACTS SEVENTEEN (2015), FICTION RIVER: SPARKS (2016) and 2113: Stories Inspired by the Music of Rush (2016)

Born in Sudbury Ontario, Mark has courted with a serious addiction to reading and writing his entire life. He has called both Ottawa, ON and Hamilton, ON home for about a decade each and currently lives in Waterloo, Ontario.