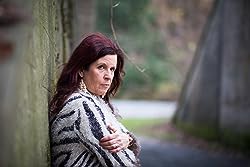 Monique Singleton writes compelling stories that mix fantasy with realistic psychological suspense and unique insights into the mind of the main characters.

As the daughter of a British soldier and his Dutch wife, Monique was born in an English military hospital in Germany. The family toured the world where she was exposed to different cultures in many countries. Finally settling down in the Netherlands she pursued a career in Art and later in ICT.

About six years ago Monique started to put the scenes she had running around in her head, down to paper.

Scenes led to a story, the story to a book, and the first book to a series.

In addition to her writing, Monique still holds down a full-time job as a business consultant. She lives in a beautiful old farmhouse in the south of Holland with her two sloppy monster dogs, some horses, and a cat.

The cat is the boss.

Get a free novella - The pre-quel to the Primal series: Warmonger. Available at Instafreebie or Monique's website

Warmonger
War is a Cull. Usually humans are capable of starting wars themselves, sometimes they need a hand. I start wars, and it’s time for a big one.